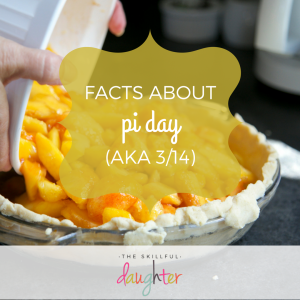 Yes, I know that picture has nothing to do with the number pi. Unless you count the fact that pie is circular, and pi has to do with circles…I like pie, okay?

My favorite number is pi. I found myself fascinated by it in ninth grade when there was a poster in my geometry teacher’s room that went over 40 digits. It was right there, on the wall, just begging to be memorized…so I memorized it.

Yes, I memorized it.

I thought that was a huge mental feat, memorizing over 40 seemingly random digits of pi. I was so into the number that I went to my town’s Pi Day celebration at one of the other high schools. There, I learned that others were also into pi and some had memorized far more digits than I had. There were kids as young as 5 competing in contests where they’d recite pi for at least a hundred digits on stage.

I may not know over a hundred digits (it’s closer to 60 now), but I still enjoy knowing random facts about the number pi. Here are some of my favorites:

I hope you enjoy your new knowledge about the number pi! Now go enjoy some p-i-e!