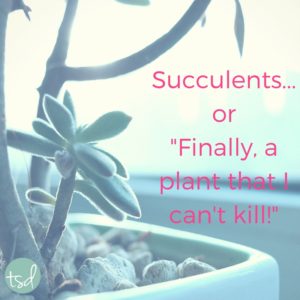 I kill plants. I don’t intend to, but I do anyway. I love the idea of having a thriving garden where I can walk out and pick veggies to use for cooking. I once had a tomato plant that survived long enough to give me 6 cherry tomatoes, but then it died too.

My paternal grandmother had a lot of plants. I remember seeing all of the flowers she had around, and I used to help her water them whenever I was there. I remember when she grew tomatoes and I thought that was the coolest thing one could do.

We had a bing cherry tree that was in our backyard when my family moved into our house in 1996. The cherries from it were delicious and we picked them for a few summers. Then one day, we went outside and found the tree laying on the ground. There hadn’t been a storm or wind or anything to do that, but it just fell over somehow. We blamed our dog at the time, Shadow, for peeing on it too much, but I know that wasn’t the cause.

My mom had flowers in gardens as I grew up, so I kind of know how to take care of plants. I’m just bad at it.

One of my friends gave me an amaryllis bulb kit at my mom’s funeral instead of a bouquet of flowers. She told me that it was a plant that even she couldn’t kill. I took it home, put it in the little pot in the box and gave it some water, and sure enough, it’s been a year and a half since then, and it hasn’t died on me. I seriously neglected it over the winter and thought it was done for, but as soon as I added water, it started to perk up and grow again.

Ah, so that was the key! I just needed plants that I could neglect! Just before Christmas, I purchased some succulents at Home Depot (I don’t even know what types–I just picked ones that I liked) and put those in a pot in my house. They’re currently out on my front porch and are still growing. 🙂

So if you’re like me and have a black thumb but would love to maintain some greenery around your home, definitely consider picking up some succulents. They’re inexpensive, and I haven’t killed mine yet!

5 Eco-Friendly Swaps You Can Make THIS MONTH
Book Review: This is Your Brain on Sports (B4B)